I should have started my new blog-wave with this article, but I was too excited to write about my trip to Japan first..anyway, here is my situation:
Since I just moved from Montréal to this charming little town in July, I have been working as part of the coordination team for the 1001 pots event. It was an extremely busy time. That ended the end of August.
Then came the time to set-up my studio in my new home and unpack everything. What an annoying task. Where to store all the clay, which spot is the best for the wheel, adding shelves here and there and re-shaping a space that was so familiar to me before the move. Moving your studio is not great but being in the countryside and so close to forests and lakes is worth it. So all went well until it was time to decide what to do with the kilns, electric that is. Since we are renting a house at the moment, we can't and don't want to invest in a shed or a structure for my kilns. So after much thought and consulting other potters, I have decided to move only my small kiln and store it...outside. A potter friend made me a special extension cord for it. So I have been firing in it since end of October. It is my only kiln at the moment. I have to fire almost everyday because it's so small. And for bigger pieces, I have to control myself for the moment.
Small kiln, big breakthrough. One night, the kiln went on for 9 hours. Obviously something went wrong for a cone6 firing! I only rely on the small cone because it's such a tiny kiln. It's never done that in the 6 years I've had it. It went up to about cone10. The next morning it was like Christmas, totally unexpected results and pretty sweet too. I've been wanting to test my glazes at a higher temperature but haven't had the time and guts...Here it was, it did it for me. I've been firing cone9 since and boy am I happy!
One step at a time I am getting closer to my dream; a woodkiln.

Posted by Carmen Abdallah at 10:12 PM No comments: 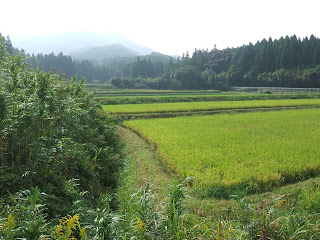 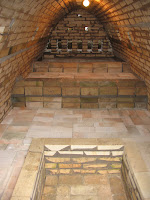 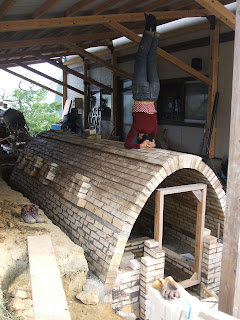 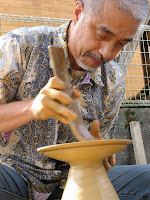 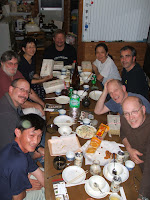 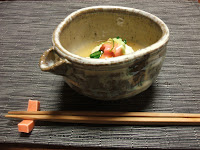 " I feel it's the beginning of a beautiful friendship "
Posted by Carmen Abdallah at 10:02 PM No comments:

Taking it to a whole-other-level

OK, so I haven't written in forever...maybe even never, because I have only been posting photos all those years.
The time has come for me to make a choice. Delete my blog from the cyber-ceramics world or take it up a notch and actually write interesting things about my work, creative process, inspirations and projects. I am going with option #2. Watch out, I am taking it up a notch! To start it off, I will be posting an article about my wood-kiln building travel experience in Japan in October 2010.
Posted by Carmen Abdallah at 10:10 PM 3 comments: